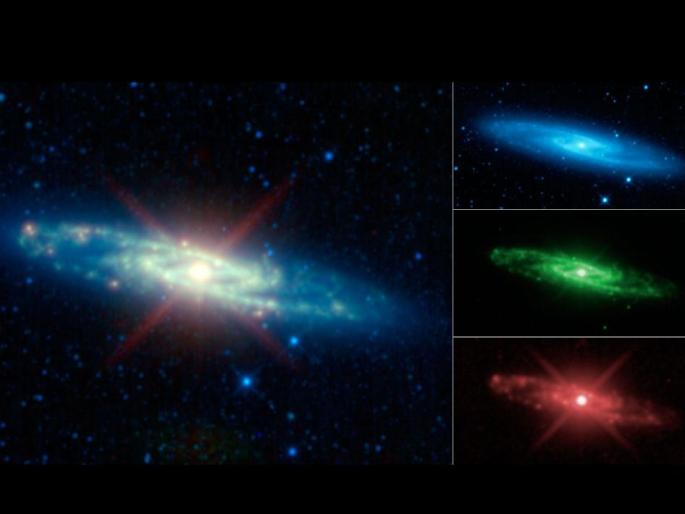 The Sculptor Galaxy heats up

Wise takes us to the Sculptor Galaxy NGC 253

Astronomy News – In the next leg of the human “Journey to the Beginning of Space and Time” we travel 11.4 million light years, give or take a few hundred thousand, to the Sculptor Galaxy NGC 253 (the Silver Coin Galaxy) to view an infrared mosaic of images taken by NASA’s Wide-field Infrared Survey Explorer (WISE). Part of the Sculptor group of galaxies (South Polar Group), the 7.6 magnitude Silver Coin Galaxy has infant stars in duty cocoons heating up the galaxies core and broadcasting infrared light into the universe and is the brightest member of the Sculptor group of galaxies. Young emerging stars in the infrared images shown here are concentrated in the galaxies core and along the spiral arms. The green areas are tiny dust or soot particles left after the formation of these emerging stars that have absorbed the ultraviolet light from these young stars, which makes these particles glow with infrared light the four infrared detectors on WISE can detect. The blue image on the top was taken in the short wavelengths, about 3.4 and 4.6 microns, this photo has stars of all ages scattered all over the Sculptor Galaxy.
NGC 253 is considered a starburst galaxy, and an intermediary type of spiral galaxy, with stars forming and exploding at unusually high rates in an intense star-forming period. First recorded by Caroline Herschel, the sister of astronomer William Herschel, on September 23, 1783, the Sculptor Galaxy can best be seen in the Sculptor constellation in the southern night sky in late September by stargazers using a time-machine-to-the-stars. Stargazers with good eyes and a dark sky can even view NGC 253 during this time, just be prepared to spend a little time in the search for the Silver Coin Galaxy.

Wise continues to go forth into the unknown

Check out my newest astronomy blog at http://astronomytonight.yolasite.com/.

Learn why astronomy binoculars are a popular choice with amateur astronomers

Read about the Anasazi Indians