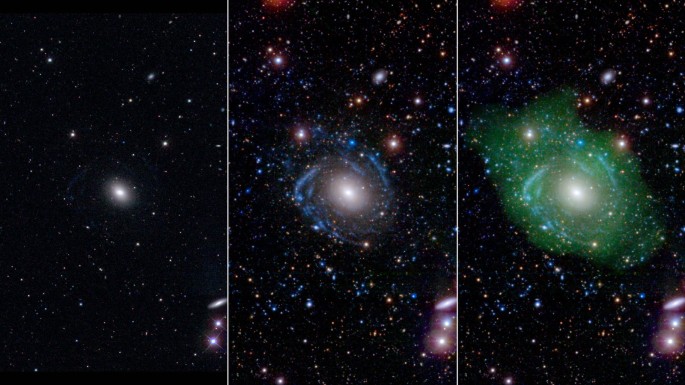 With 10 times the mass than first estimates and a younger inner region than outer, this out-of-the-way galaxy appears to be composed of assorted parts from other island universes

Living in a suburban neighborhood of an out-of-the-way little town or city is beneficial if you want to stop change due to foreign influences and exchanges. In a similar way, astronomers believe humongous, bizarre galaxy UGC 1382 kept its stunning size and the backward ages of its inner and outer components. At around 720,000 light-years across its more than seven times wider than the Milky Way and one of the largest isolated galaxies detected during the human journey to the beginning of space and time. The inner regions of this unusual galaxy are also younger than its outer parts, which would be like finding a tree whose inner growth rings are younger than its outer rings. It’s like UGC 1382 was put together from different parts of other galaxies that are held together by a delicate balance between processes and forces. An equilibrium scientists study in order to gain more understanding and knowledge of the evolution of galaxies and the universe.

“This rare, ‘Frankenstein’ galaxy formed and is able to survive because it lies in a quiet little suburban neighborhood of the universe, where none of the hubbub of the more crowded parts can bother it,” said study co-author Mark Seibert of the Observatories of the Carnegie Institution for Science, Pasadena, California. “It is so delicate that a slight nudge from a neighbor would cause it to disintegrate.”

Seibert and graduate student Lea Hagen discovered the massive size and backward ages of the inner and outer portions of UGC 1382 while looking at images of the galaxy taken by NASA’s Galaxy Evolution Explorer (GALEX) in ultraviolet wavelengths. They had been searching for data on star formation in average elliptical galaxies, instead, a titan with intangible arms extending far outside UGC 1382 emerged from the darkness.

“We saw spiral arms extending far outside this galaxy, which no one had noticed before, and which elliptical galaxies should not have,” said Hagen, who led the study. “That put us on an expedition to find out what this galaxy is and how it formed.”

Painstakingly searching through data of the galaxy obtained by a team of telescopes astronomers built a new model of the structure and dimensions of this mysterious behemoth. Spanning nearly 720,000 light-years, UGC 1382 is one of the largest galaxies ever discovered. Very few new stars form in this island universe because gas is spread thinly along its rotating disk. Astronomers are studying the history of star formation and evolution of this unusual galaxy looking for clues to explain the mysteries uncovered.

The most tantalizing clue’s the relative ages of the various parts of galaxy UGC 1382 are backward compared to previous galaxies observed during the human journey to the beginning of space and time. Normally, astrophysicists expect to see new star formation primarily in the outer, newer regions of a galaxy, while the older, inner regions contain mainly older stars. By combining data collected by the team, scientists determined the unusual structure and evolution of star formation in this massive galaxy.

“The center of UGC 1382 is actually younger than the spiral disk surrounding it,” Seibert said. “It’s old on the outside and young on the inside. This is like finding a tree whose inner growth rings are younger than the outer rings.”

Astronomers think this unique galaxy resulted around 3 billion years ago when two smaller galaxies began orbiting a larger, possibly lenticular galaxy, which eventually settled into current galaxy UGC 1382. They continue to study this unusual galaxy looking for additional clues to explain its unique structure and evolution compared to other members of the Galaxy Zoo. This data will enable the search for more examples of this galaxy to help explain its unusual structure and evolution.

“By understanding this galaxy, we can get clues to how galaxies form on a larger scale, and uncover more galactic neighborhood surprises,” Hagen said.

Learn how astronomers think galaxy CGCG254-021 Got Its Tail.

Take the space voyage of NASA.

Learn more about the space discoveries of the ESA here.

Learn more about the discoveries made by the GALEX mission here.

Read about the discoveries made by the Two Micron All-Sky Survey (2MASS) here.

Discover the cosmos on board the National Radio Astronomy Observatory’s Very Large Array.