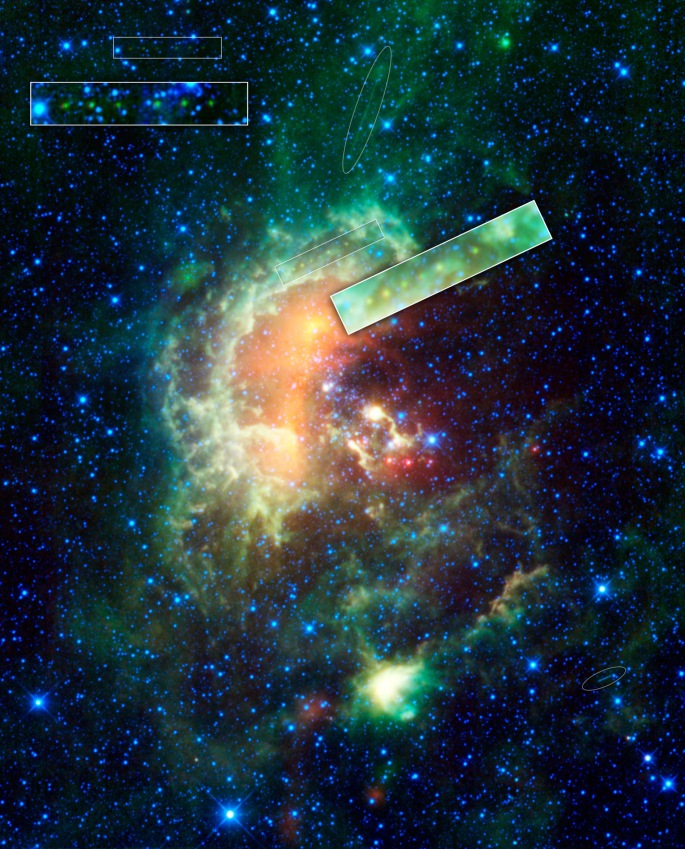 Along with two satellites orbiting Earth above WISE

A part of the universe full of young, hot stars only a million years old, the Tadpole nebula is one of the best and closest places to study the formation of new stars. At a distance of 12,000 light-years from Sol in the constellation of Auriga, the two tadpole-shaped pillars that give this region of space its name contain numerous new stars with as much as ten times the mass of our sun. Called Sim 129 and 130, the chaotic areas near the heads of these pillars are believed to harbor new stars and protostars in the process of forming.

The mosaic of images above taken by NASA’s WISE spacecraft showcases the Tadpole nebula, plus two slow moving satellites orbiting above WISE, and two slower moving asteroids traveling through the solar system.

Asteroid 1719 left a line of yellow-green tracks running across the image and pictured in the boxes near the center. Discovered in 1950, this ancient wanderer orbits in the Main Asteroid Belt between Mars and Jupiter, and takes 4.3 years to orbit Sol.

Asteroid 1992 UZ5 is also viewed traveling across the image and is highlighted in the boxes displayed at the upper left. Little data has been gathered on this ancient rock from the dawn of the solar system. Astronomers expect to know more about this visitor from the past in the years ahead.

Highlighted in the off-center ovals near the center top and bottom right of the image are two satellites caught moving in front of WISE that appear as faint green trails.

You can learn more about asteroids from the dawn of the solar system here.

You can take the voyage of WISE here.

Discover the mission of NASA to take mankind to the stars here.

Read about a magnetar astronomers detected orbiting extremely close to the Monster of the Milky Way.

Learn about plans for the human journey to the beginning of space and time to head to Jupiter’s moon Europa to look for signs of life.