Sitting in the arms of Cassiopeia (The Seated Queen)

Each of the unmistakable blue knots seen strewn across NGC 278’s spiral arms is a clump of hot, newly born stars. These blue knots of young stars doesn’t extend to the outer edges of the galaxy but only reside within an inner ring some 6,500 light-years across. The two-tiered structure astronomers have identified within NGC 278 shows a bright galactic center, with much darker outer regions.

Astrophysicists studying this unusual spiral galaxy think this weird two-tiered structure and current starburst activity is due to a recent merger with a smaller, gas-rich galaxy. A merger that has ignited starburst within the center of this island universe, while the leftovers of the galactic snack dispersed into its outer regions. This activity created the ring of blue knots of newly formed stars seen here, which astronomers have dubbed a nuclear ring. A very unusual structure not often observed in galaxies with a bar across their center region. Making NGC 278 an unusual, intriguing galactic specimen they plan on studying closer for clues to its unusual nature.

Read about the transition phase older spiral galaxy NGC 5010 is going through.

Learn about the things NASA has discovered during the human journey to the beginning of space and time here.

Read and learn more about galaxies.

Discover everything they know about spiral galaxy NGC 278 here.

Learn more about the northern constellation Cassiopeia (The Seated Queen). 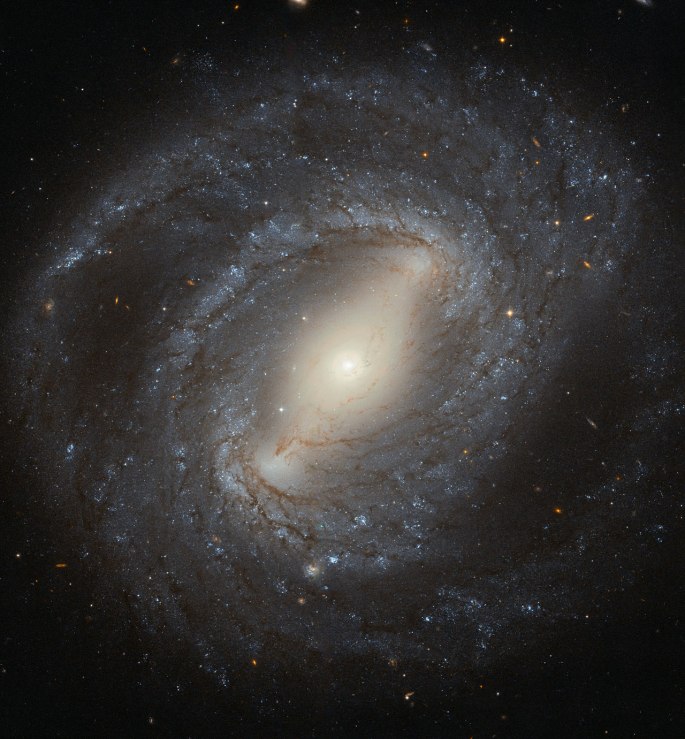 First documented in the western world by German-British astronomer William Herschel, barred spiral galaxy NGC 4394 is a member of the most common type of galaxy viewed in the Galaxy Zoo. Estimated by astronomers to be 55 million light-years from Sol, toward the constellation of Coma Berenices, this island universe is considered a member of the Virgo Cluster.

The prototypical barred spiral galaxy, NGC 4394 has bright spiral arms sprouting from the ends of a bar cutting through its middle bulge. Sprinkled with blue, young stars its spiral arms contain fuzzy regions where stars are being formed and dark filaments of cosmic dust. Near the center of this island universe lies a region of ionized gas known as a low-ionization nuclear emission-line region (LINER). An active region displaying a specific set of emission lines in its spectra, a LINER contains mainly weakly ionized atoms of oxygen, nitrogen, and sulfur.

LINERS have been viewed relatively often during the human journey to the beginning of space and time and they’re starting to piece together their puzzle. Astronomers still need to figure out where the energy comes from to ionize the gas. Presently astronomers believe it could be due to the influence of the supermassive black hole or extreme levels of star formation. In the case of NGC 4394, gas from a nearby galaxy has likely flowed into its central region, providing a new source to fuel the process, either way.

You can learn more about galaxies with a LINER here.

Discover the space journey of the ESA.

Learn about the next generation Giant Magellan Telescope

Learn about astronomers observing the formation of a new galaxy