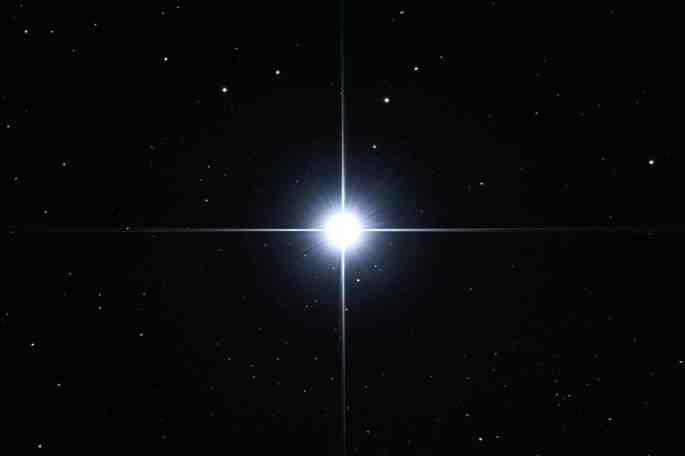 Ancient Astronomy – Sirius 1 is the main star in the star group Canis Majoris and the brightest in the night sky. Called the Dog Star by both ancient star watchers and modern astronomers, Sirius is mentioned in the cosmology and myths of many ancient cultures. In 1836, European astronomer Friedrich Bessel measured an imperceptible wobble in the orbit of Sirius, he believed was caused by something pulling on the Dog Star. After studying Sirius astronomers determined the Dog Star is orbited by a fainter companion star about every fifty years.

This unseen companion star, called Sirius B, was finally seen around 1862 by American telescope designer Alvin Clark, through an 18.5-inch refractor which was the most powerful telescope in the world at the time. It would be half a century before astronomers at California’s Mount Wilson Observatory discovered Sirius B is, in fact, a new type of super dense star they called a white dwarf.

The puzzle concerning the Dog Star deepened in 1950, when two noted French anthropologists just back from what’s today the Republic of Mali, reported that the unseen companion star had been the celestial keystone of the Dogon tribe’s cosmology for centuries. The French scientists had lived with the Dogon tribe for over a decade, by which time they had come to learn their cosmology. They reported watching Dogon holy people use sticks to scratch a rough diagram of the Dog Star, with a companion star circling it in an elliptical orbit, along with a third body astronomers had not detected yet.

Dogon holy people had told the two men the elliptical orbit of the unseen companion star stood for fertility. They said the small companion star orbited the main star every fifty years and was called po. It was made of a metal the Dogon called sagala, according to Dogon holy people, and was brighter than iron and so heavy the population of Earth couldn’t lift it.

The mystery went even further when the Frenchmen indicated the cosmology of the Dogon goes far beyond the star Sirius. They discovered the Dogon believe Jupiter has four large moons, Saturn is ringed, and the Earth orbits the Sun.

The mystery is how can a tribal cosmology that predates the invention of the telescope be so near to the truth? Do Dogon holy people have some means of viewing the universe using divination or some type of psychic power?

Some scientists indicate the Dogon were probably not as primitive or as isolated as first reported. In fact, they indicate the traditional homelands of the tribe are close to ancient trade routes that once linked West Africa with ancient Egypt. They also border a major trade road that connected regions in Africa during ancient times, the Niger River. Timbuktu, the home of one of the greatest Muslim universities of 400 years ago, was once just south of their lands. All of these things lead scientists to believe the Dogon’s cosmology could be due to these facts or even just outrageous lying.

Alien visitors from the stars

The Dogon cosmology could be due to cultural interactions, but some investigators still point to the similarities between the real Sirius star system and the Dogon cosmology as a mystery. The Dogon, however, say there’s no mystery involved. Hundreds of years ago, they were visited by a race of beings from the Sirius star system, they call the nommo. This ancient race told them things about the cosmology of the universe before they returned to their home planet.

Very few scientists or people believe the Dogon were in fact visited by beings from the star system Sirius. There has been no forthcoming explanation, however, for how the Dogon possess astronomy knowledge concerning bodies they can’t possibly have seen. Enough knowledge according to reports to accurately sketch unseen star systems in the sand.

Watch this YouTube video on the Dogon tribe https://www.youtube.com/watch?v=g0oiYB5JQAg.

Read about the latest discovery in the search for life beyond Earth https://spaceshipearth1.wordpress.com/2013/12/25/the-search-for-life-beyond-earth-takes-a-turn-at-jupiter/.

Read about the latest images of the solar system sent back by the Cassini spacecraft https://spaceshipearth1.wordpress.com/2013/12/22/cassini-spacecraft-show-views-of-the-solar-system-in-natural-color/.