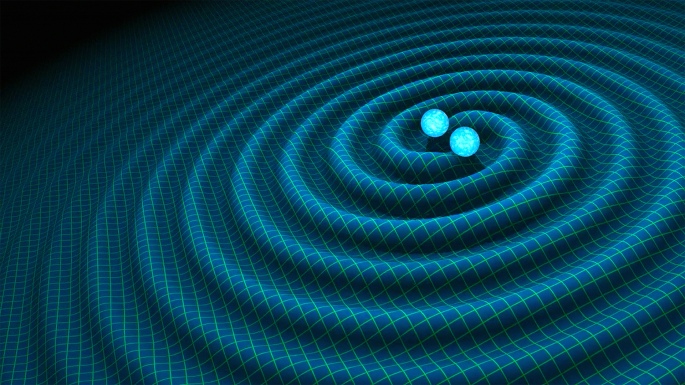 Traveling across the fabric of spacetime as two black holes merge

Astronomers working with the Laser Interferometer Gravitational-Wave Observatory (LIGO) recently announced they had observed the ripples of gravitational waves in space-time as predicted by Albert Einstein in his ground-breaking general theory of relativity in November of 1915.

Using two LIGO ground-based observatories in Livingston, Louisiana, and Hanford, Washington, astrophysicists observed gravitational waves within the range of 10 to 1,000 cycles per second (10 to 1,000 Hz). LIGO is the most sensitive instrument ever devised by man but is only sensitive to gravitational waves within this narrow band of frequencies and specific source types.

Astronomers believe the gravitational waves observed by LIGO were produced in the final moments of the merger of two black holes into a single, spinning monster black hole. The collision and eventual merger of black holes were predicted by scientists, but this is the first time it has been observed as it happened. You can watch and learn more about astronomers simulations of two black holes merging here.

In this case, astronomers estimate two black holes around 150 meters in diameter, with 29 and 36 times the mass of Sol, collided at nearly half the speed of light and produced the gravitational waves observed. All estimates of size, mass, and other parameters made using LIGO have a significant plus/minus, so the numbers provided should be taken with a grain of salt, or two.

General relativity predicts these black holes collided into each other at almost fifty percent the speed of light. The collision forms a single, more massive black hole, but a portion of the combined mass of the black holes was converted to energy according to Einstein’s E = mc2. It was this energy that was emitted and observed by LIGO as a strong burst of gravitational waves, producing the violent storm in spacetime detected.

Doors to a new cosmos open

This news kicks open doors to a new branch of astrophysics, well refer to as gravitational astronomy, scientists have dreamed of exploring for over 50 years. Astronomers expect this young branch of astronomy to offer information capable of opening doors that will allow us to view the cosmos in ways the study of electromagnetic radiation hasn’t allowed. It will also complement the things we have learned about the cosmos through the detection and study of electromagnetic radiation.

Essentially a high precision laser interferometer in space with an arm length of 1 million km, eLISA will open even more doors and windows to the gravitational universe and extend the cosmic horizon. This important mission extends the spectrum of gravitational waves astronomers want to study.

The ESA’s LISA Pathfinder mission, in partnership with NASA, is currently getting ready to demonstrate technologies expected to be used in future space-based gravitational observatories. LISA Pathfinder is currently at the L1 LaGrange point, about 1.5 million km in the direction of Sol, and is preparing to begin its science mission.

LISA Pathfinder was made to test the theory that free particles follow geodesics in spacetime, which is a key idea behind the design and engineering of gravitational wave detectors. Scientists had to design and engineer new technologies that allow them to track two test masses nominally in free fall, using picometer resolution laser interferometry.

You can learn more about NASA here.

Discover the mission of eLISA here.

Learn more about the ESA here.

Learn about US congress recognizing the right of US citizens to own asteroid resources.

Read about concerned earthlings planning on moving to the Red Planet in the future.

Henceforth space by itself, and time by itself, are doomed to fade away into mere shadows, and only a kind of union of the two will preserve an independent reality. (Herman Minkowski, 1908)

The universe is made of different types of matter and energy traveling through space as time passes unnoticed. Until the time of Einstein, scientists thought and discussed time and space as though they’re absolute and distinct, which is the way they appear to our senses in everyday life. But what if reality is different then it appears?

The goal of this series of articles is to show the ability of Einstein’s space-time to help us understand the true nature of physical reality in the universe. This will be accomplished by first providing knowledge and understanding of the flat space-time of the special theory of relativity and consequences of the theory such as length contraction, the twin paradox and time dilation. Next, we’ll offer an introduction to the nature and consequences of the curved space-time of the general theory of relativity, including the idea of an ever-expanding universe, and the nature and meaning of black holes.

The first article in the series is titled “Einstein’s Revelations on Space-time”. This article will be posted during the months ahead and talk about the life and work of Albert Einstein and its stunning revelations for space-time. Einstein’s theories of relativity and their dramatic consequences concerning the true nature of space-time are considered by many to be the greatest scientific discovery of the century. They have replaced ideas concerning the true nature of space and time believed since the age of Newton and Galileo, and are often difficult to grasp at first. In order to better comprehend the theories of relativity readers need to abandon preconceived notions concerning the nature of time and distance measurements, simultaneity, and causality in the universe.

Time and distance measurements in Einstein’s space-time will surprise and startle you and simultaneous events will fool you if you aren’t mentally sharp. The limiting nature of the speed of light also results in interesting consequences for cause and effect in the universe.